The best of Northern India is brought to you in the Golden Triangle tour package. The combination of Delhi, Agra, and Jaipur ensures a whale of time for all first timers to India. The package is a perfect for those looking forward to check out the capital city of India - Delhi, the joyous and colourful land of Jaipur in the Indian royal state of Rajasthan and the city of Taj - Agra. The three tourist destinations covered in the Golden Triangle tour package offer a variety of tourist interest places. One also has an option to extend this tour by visiting Khajuraho, a World Heritage Site, renowned for the 10th century A.D. marvelous temples containing stunning sculptures. Life in every form and mood has been beautifully etched out in stone, justifying the excellent craftsmanship and artistry of the workmen.

Day 1 - Arrive Delhi - the capital city of Republic of India

Traditional welcome - Atithi Devo Bhava (Guest is god) by garlanding on arrival at Delhi international airport by Travel Pals executive. Transferred in your private air-conditioned deluxe car to your hotel. Day at leisure to relax. On December 12, 1911, George V, the then Emperor of India along with Queen Mary made the announcement to shift the Capital of the British Raj from Calcutta to Delhi at the Delhi Durbar and laying the foundation stone for Viceroy's residence in the Coronation Park. The capital city can be easily divided into two parts - Old & New Delhi. While Shahjahan built a new walled city which served as the capital of Mughal Empire from 1649 to 1857 AD and is now regarded as Old Delhi has many ancient & medieval monuments, archaeological sites & remains. The New Delhi was planned & built by leading 20th century British architects Sir Edwin Lutyens and Sir Herbert Baker and contracted to Sir Sobha Singh. The present President House, Indian Parliament & other Government Secretariat buildings were built by them. 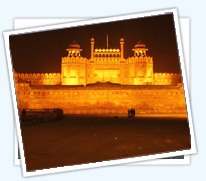 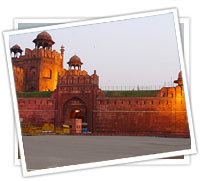 After breakfast, guided tour of historic city of Delhi. The city where one can experience the influence of the many rulers who ruled this region, a city built and destroyed and re-built over seven times. The guided tour takes you to the monuments that depict the different eras. The tour includes visit to the magnificent Red Fort, the Jama Masjid - Asia's largest mosque, Rajghat - the memorial to Mahatma Gandhi - the "Father of the Nation". Afternoon tour of New Delhi to include Humanyun's Tomb, Birla Mandir, Bahai's Temple, Qutab Minar, India Gate, President's House and drive through Connaught Place. Evening, see Son-et-Lumerie at Red Fort (optional). Overnight at hotel.

After breakfast, drive to south west of Delhi passing through the countryside on National Highway 8 to capital city of Rajasthan state - Jaipur. Famously known as the Pink City due to pink colored buildings in the Old walled part of the city, it was founded in the 1727 by Maharaja Sawai Jai Singh II. The city was planned according to Indian Vastu Shastra (Pouranic planning for the comfort and prosperity of the citizens) is considered by many urbanites to be the best planned city. Check-into hotel on arrival. Later, proceed for half day guided city tour visiting City Palace museum, Jantar Mantar - the observatory having instruments from 1728 AD for measuring celestial planet & star positions. Drive past the Palace of Winds (Hawa Mahal). Evening, enjoy a drive around the local streets of Jaipur in the car. Overnight at hotel. 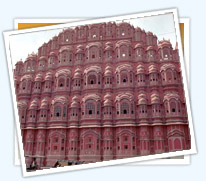 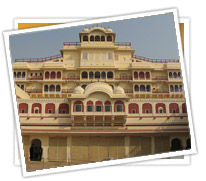 After breakfast, guided excursion to Amber Fort - the ancient capital of the state until 1728. Ascend the fort on a gaily-decorated elephant back. Experience the kingly palace buildings. Evening free for wandering around the bazaars where one can choose from precious gems to variety of handicrafts. Overnight at hotel. 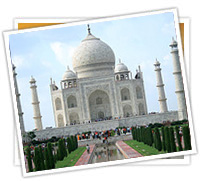 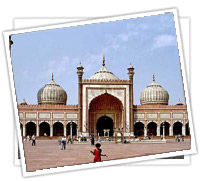 Dawn visit to famous wonder of the world - Taj Mahal built by Emperor Shahjahan in memory of his beloved wife Mumtaz Mahal. Witness one of the best views of the Taj Mahal in less crowded and budding sun-light. Taj (as it is called commonly) - as a symbol of love has many stories to tell. The perfectly symmetrical monument standing tall since 1653 AD took 22 years & 20,000 laborers to complete. The unquestionable beauty of this piece of extravagance can only be treasured by visiting it. Return to the hotel for breakfast & check out. Later visit the Red fort, Itimad-Ud-Daulah - famous for its Pietra dura. Later drive to Delhi. On arrival at Delhi, check into airport hotel for wash and change. Depending on flight schedule transfer to international airport for connecting flight to onward destination.
Call Now
Directions