Welcome to Lake city the Venice of east, pick up from railway station or airport in the morning . Check In the hotel . After breakfast, full day guided sightseeing including visit to 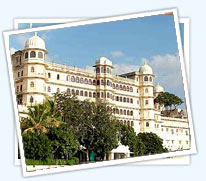 City Palace is the largest palace in Rajasthan, located on the eastern shore of Lake Pichola, it is a massive fortified structure, presenting an amazing blend of rajasthani and Mughal architecture covering an area of 5 acres. The Facade of the Palace resembles a fortress. The halls and courtyards of the Palace’s older section are linked by narrow passages and steep stair cases. The Tripolia gate and the Ganesh Deorhi gate are the major gates of the City Palace.

Jagdish Temple is one of the famous temples of Udaipur made in Indo-Aryan style of architecture in the year 1651, was built by Maharana Jagat Singh, who ruled Udaipur during 1628-53. The temple is dedicated to Lord Vishnu (Laxmi Narayan), the preserver of the Universe. It is celebrated for being the largest temple in the city of Udaipur. The gateway of this temple can be sited at a distance of 150 meters from the Bara Pol of the City Palace. 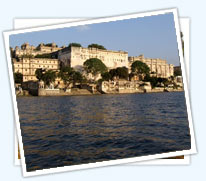 Pichola Lake is one of the most beautiful and picturesque lakes of Rajasthan, India. Located in the heart of the city, Pichola Lake is the oldest and one of the largest lakes of Udaipur. In 1362, the beautiful lake was built by Pichhu Banjara during the ruling period of Maharana Lakha is extended to 3 miles in length, 2 miles in width and has depth of 30 feet.

Also known as Sajjan Niwas Garden is the largest garden of Rajasthan, sprawled over 100 acres of land. During 1850's, Maharana Sajjan Singh took the initiative to built this beautiful garden. Sajjan Niwas Bagh is celebrated for its numerous varieties of roses, this garden is also known as Gulab Bagh or Rose Garden. 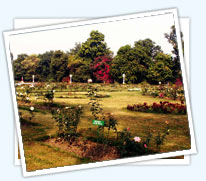 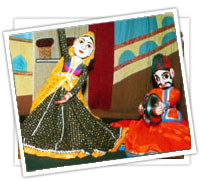 Bhartiya Lok Kala Museum is one of the most famous museums of Udaipur, exhibiting the brilliant collection of folk articles of Rajasthan from typical rural-dresses, ornaments, puppets, masks, dolls, folk musical instruments, folk deities and paintings. The museum is comfortably located in the building of Bhartiya Lok Kala Mandal near Chetak Circle in Udaipur city.

Sahelion Ki Bari "Garden of maids" is a major tourist destination in Udaipur. The garden is famous for its lush green lawns, marble art and fountains, presenting a green retreat in the dry lands of Rajasthan. Garden of maids was built in the 18th century by Maharana Sangram Singh for the royal ladies. 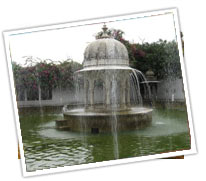 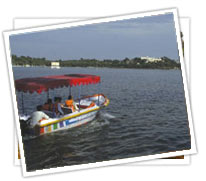 Fateh Sagar Lake is the second artificial lake of Udaipur, the first being Jaisamand Lake. Located in the north of Lake Pichola, Fateh Sagar Lake lies just besides the entrance to Moti Magri Hill. Built in 1678 by Maharana Jai Singh, Fateh Sagar Lake got its name from Maharana Fateh Singh, who later made additions to it. The lake extends to the length of 2.4 km, 1.6 km. in width and deep to the extent of 11.5 meter. During the monsoons, the lake covers the total area of around 1 sq km.

West Zone Cultural Center has set up an artisan’s village called - Shilpgram, 3 Km's west of Udaipur. It is a living ethnographic museum depicting life style, traditions, customs and folk arts of the rural and tribal people of the states of Rajasthan, Maharashtra, Gujrat, Goa, Daman, etc. There are several huts constructed in the traditional architectural style using mud and local building material to reflect the geographical and ethnic diversity of the different states of west zone of India. The rural artisans and folk artists reside here and perform in the natural surroundings in a village environment. Every year, more than a lakh visitors visit this village which is spread out in an area of 55 acres, surrounded by Aravali mountains. The Shilpgram Utsav organized every year from 23rd December to January 1st, attracts massive crowd creating a scene of rural market fair and festival with live performance of folk artist from different parts of the country. The Terracotta Museum, the museum of masks, folk and musical instruments are of particular attraction. 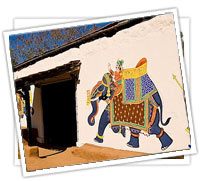 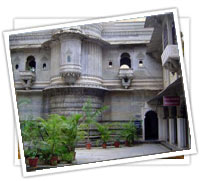 Bagore Ki Haveli is an ancient building that stands on the platform of Gangor Ghat in the vicinity of Pichola Lake. The splendid architecture of the mansion boasts of delicate carved and excellent glass work. In the eighteenth century, Bagore Ki Haveli was built by Amir Chand Badwa, who was the Chief Minister at the Mewar Royal Court in earlier times.

A former Monsoon Palace 1100 ft. high above the surrounding and 3100 ft. from sea level was built by Maharana Sajjan Singh in 1884. The palace looks its best during the rainy season. It offers a panoramic overview of the city’s lakes, palaces and surrounding. The hillside is thickly wooded and the former rulers maintained this as a royal shooting preserve. 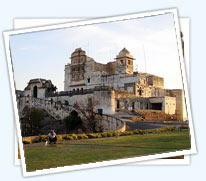